What’s in store for the Legal Services Industry now?

This is the big question that keeps me up at night, since answering this informs the products and services that LexisNexis should develop. We attempted to tackle an answer to this question several years ago, and initially identified three mega trends that have / will impact the Legal Services industry: Since then, we’ve had a pandemic, which has fundamentally changed where and how knowledge workers operate. As many of us know, moving to a fully remote working environment overnight had challenges (everything is a meeting) and benefits (no commuting). I won’t go more into leading and navigating the ‘new normal’ or the ‘great return to the office’ in this post, although we may return as events evolve. Due to the massive disruption, we should revisit the big questions – what, if anything, has now changed? 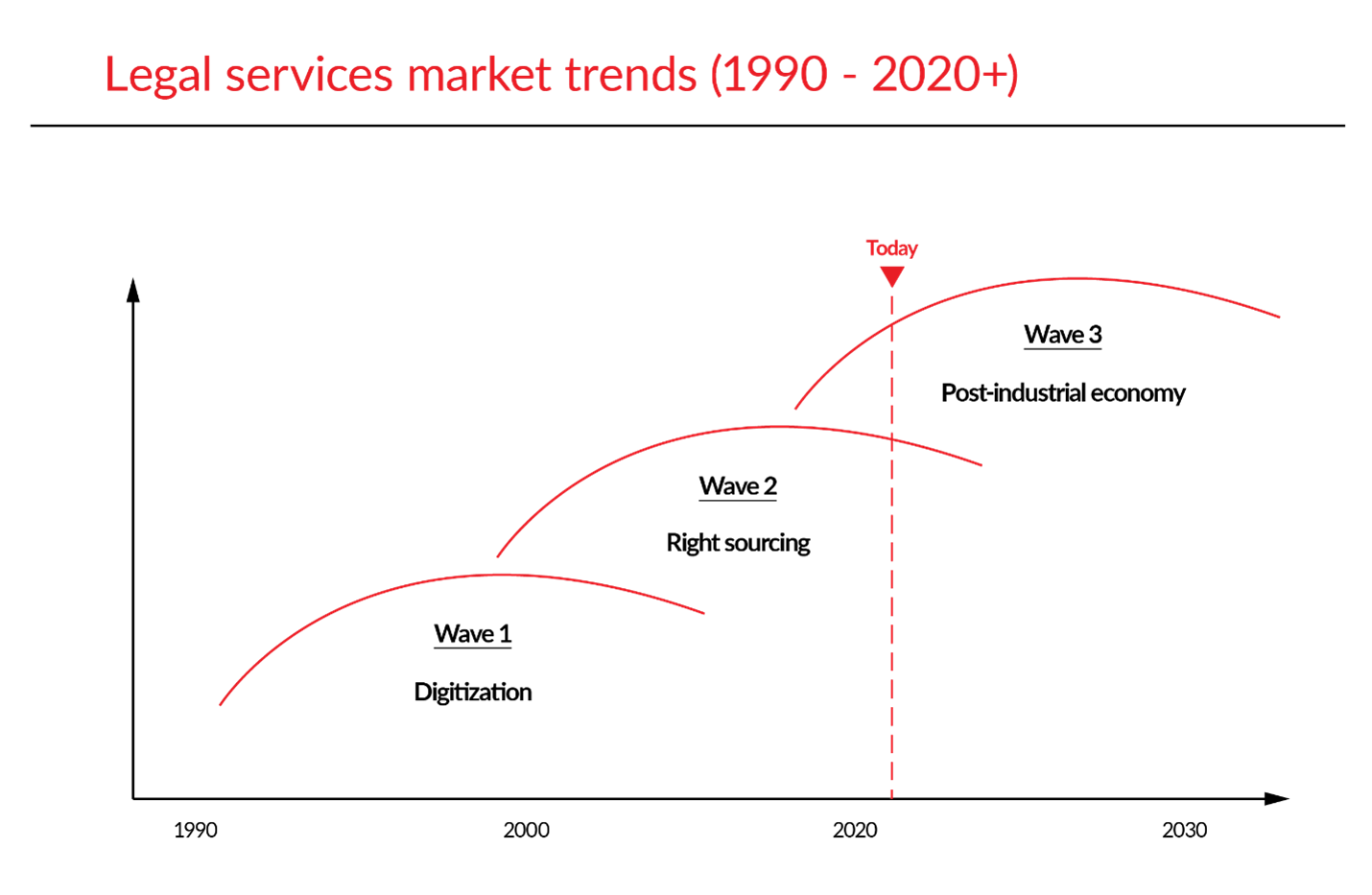 In short, everything, yet nothing! The three mega trends we previously identified are still impacting the industry, but interestingly the mix and impacts are now different. Let’s take each wave individually:

This wave had broadly finished as initially envisioned with the industry and the economy as a whole moving through the long tail of gradual changes. A great example of this is RELX (LexisNexis’s parent company), which had 64% of total revenues come from print in 2000. As of 2015 this number was 15% and by 2020 it had declined further to 8% - a slow, gradual, decline as generational shifts occur.

The pandemic, however, has changed this wave and brought it back to focus. Being forced to work remotely we all undertook a new wave of digitization of our activities. Meetings are now virtual, desk-side check-ins have been replaced with chats on platforms like Teams, phone calls are now video calls. We’ve now digitized people-to-people interactions, which was previously unthinkable due to behavioral norms. Potentially this is now the final frontier of the digitization wave – what is now left to digitize? Is the metaverse the beginning of this?

Coming back to reality, the bigger impact of this wave coming back is more fundamental. We’ve now got used to interacting and doing business without ever meeting people face-to-face. If you no-longer need to physically meet people, does it matter if they are located in a major metropolitan center? This shift and question conveniently brings us to the second wave.

At the heart of this wave the continued and now potentially accelerated need for corporate legal departments to do ‘more with less’ on routine work. The caveat of ‘routine work’ is a more recent development. As we saw at the start of the pandemic, law firm revenues increased for the largest firms counter to many expectations. It appears that corporations are still willing to spend for ‘bet the company work’ when uncertainty is high and getting the right outcome is critical.

That being said, as anyone who has worked in a corporation knows, spending more in one area means that economies are needed in others. This has led to an even stronger resurgence of the right-sourcing wave, especially for more routine matters. Far from beginning to peter out, it may only just be getting going. There are many initiatives and changes that this wave drives such as increasing in-house team sizes, driving legal ops functions, using ALSPs, driving for smaller law firm panels, and increasing use of alternative fee arrangements. I won’t go into each of these today – they have already been covered extensively elsewhere and the nuanced impacts of some of these deserve their own detailed analysis.

We can now add into this mix the digitization of people-to-people interactions. This helps to reinvigorate and significantly accelerate the offshoring and near-shoring of legal expertise. This is also enabled by the shifts we are seeing of people moving out of city centers to more regional and smaller metropolitan centers, which provide fuel for firms based in these areas to expand. If you no-longer need to meet your lawyers face-to-face, will you pay a premium for their location?

The evolution of the near-sourcing trend has the potential to change where law is practiced and change how teams work and interact with each other. Depending on how prevalent this becomes, we may find that most routine work is handled outside of major metropolitan centers, which has a host of other organizational, leadership, and business model implications for law firms. Some of these will be further enabled by the third wave.

This wave is the most unchanged and insulated from the effects of the pandemic. Driven, in-part, due to its more nascent nature, which means it could still have the greatest impact on the industry over the next 10 years. What the post-industrial economy represents is the transition to data and information as a key value driver in the economy (i.e., data, information, and analytics add value to solutions, rather than the building of better physical products). This wave is being underpinned by a number of different technologies and enablers that have continued to mature and have become more prevalent and integrated across the economy over the past few years. These include data proliferation, artificial intelligence / machine learning, hyper-personalization, natural language processing and generation, and blockchains. As an aside, I think that could be the most buzzword bingo sentence I’ve ever written, I’m sorry.

Some of these technologies and enablers fundamentally underpin what is next for the knowledge economy and the future of the legal services industry. To do them justice I’ll explore them and their potential impacts individually in future posts.

What’s your take on these trends? Do you think they are still valid? We will soon be holding the first of our Master Class Series for 2022 and over the course of the year we will touch on some of these issues.   We look forward to having the debate and help shape the vision of our industry.